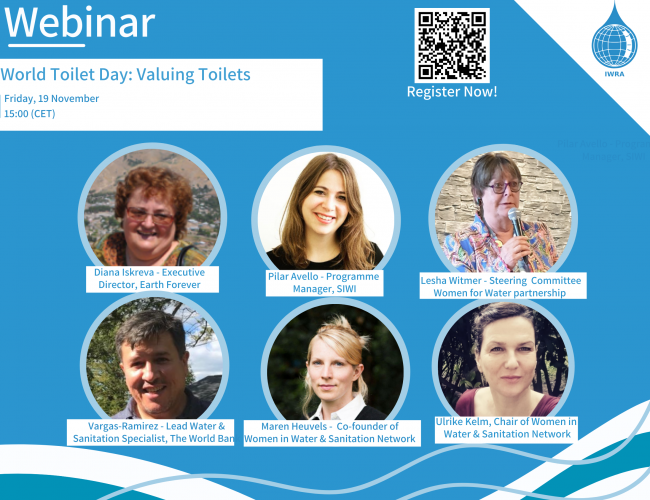 Diana Iskreva looked at the critical state of sanitation in Bulgaria and particularly the impacts of climate change on the relationship between sanitation and compliance with European standards for waste management. In particular, European support is instrumental for building the infrastructure. However, engaging women as agents for the management of sanitation is lagging. Women are often consulted too late to make a serious impact. Thus, there are actions for awareness raising both at the legislative level and at the grassroots level. It is anticipated that this will have a transformative impact, bringing a new perspective to sanitation and its management.

Pilar Avello considered the ways that sanitation and access to toilet facilities need to be understood from a human rights perspective. This looks specifically not only at the access of toilets in private homes but also in public spaces as well. While it is easy to focus on the idea of a private toilet, the reality is that for many reasons in our daily lives, much of the toilet use is in public spaces such as parks or transportation stations. However, looking at the principles of human rights, it is seen that there are often concerns with the number of toilets which are provided to both women and men. Similarly, in some cases, costs are being charged differently depending on the gender. In numerous areas, there are innovative schemes to use government grants to open toilets which might be on private land (such as a restaurant) to the public. This off-sets costs of running the toilets and addresses the need to offer toilets to the public.

Lesha Witmer looked at the relationship between construction and the ways certain designs (often from male designers) negatively impact safety or privacy concerns for women. For example, a light in the toilet may draw attention to a woman who is using the toilet and would be a signal to possible attack. This encourages open defecation. Similarly, this focuses on questions around who may provide security or cleaning at these facilities. But, there are simple solutions as well. For example, good locks and strong doors on toilets can provide additional and needed security. In the end, this highlights the importance of safe toilets for women and children.

Miguel Vargas-Ramirez looked at the value not only of the toilet but also the entire sanitation and services supply chain. Sanitation is a key party to questions around not only basic service delivery but also questions around climate change and human rights. Unfortunately, too often each segment of the supply chain only focuses on their part and not looking at a holistic approach. For example, a water utility only considers the functioning of the sewers but ignores the supply of toilets or how they are used. As he highlighted, there is never only a single solution, but always a variety of approaches which need to be used together rather than in a vacuum.

Finally, Ulrike Kelm highlighted the different meanings for valuing toilets and engaged the audience to participate with their thoughts as well. The audience proposed words and ideas around equality, human rights, and access. Her presentation looked at the ways that toilets and sanitation are multidimensional, considering for example the norms around social, cultural, gender or inclusion. Concerningly, often there are few tools for many of those who are working in these fields.

The panel discussed the importance of toilets and sanitation needs to be considered from different views rather than only the economic or quantitative means. There are qualitative measures and social or cultural needs which highlight the human right to water and sanitation as well.

This IWRA webinar “World Toilet Day: Valuing Toilets” was a well appreciated event that highlighted some of the many ways that we all value toilets. The event included; Diana Iskreva, Pilar Avello, Lesha Witmer, Miguel Vargas-Ramirez, Ulrike Kelm.

Recording and presentations to come soon.

IWRA Webinars constitute an additional resource designed to help our members, academics, dedicated practitioners, and policy professionals further explore these and other timely themes engaging in fruitful discussions, also aligned with the international water agenda and in close collaboration with key partners.