IWRA formed the Early Career and Young Professionals Task Force to help further the Association’s work on effectively raising their projects and voices, as well as engaging on other IWRA and partners initiatives.

Early career and young professionals constitute a large portion of the IWRA membership, who bring great value to the Association. They are vibrant community of water experts and potential future leaders in the sector. Due to the significant role young and early career members can play within IWRA, while accelerating their career development and broadening their professional networks, a new task force dedicated to Early Career and Young Professionals (ECYP) was established. 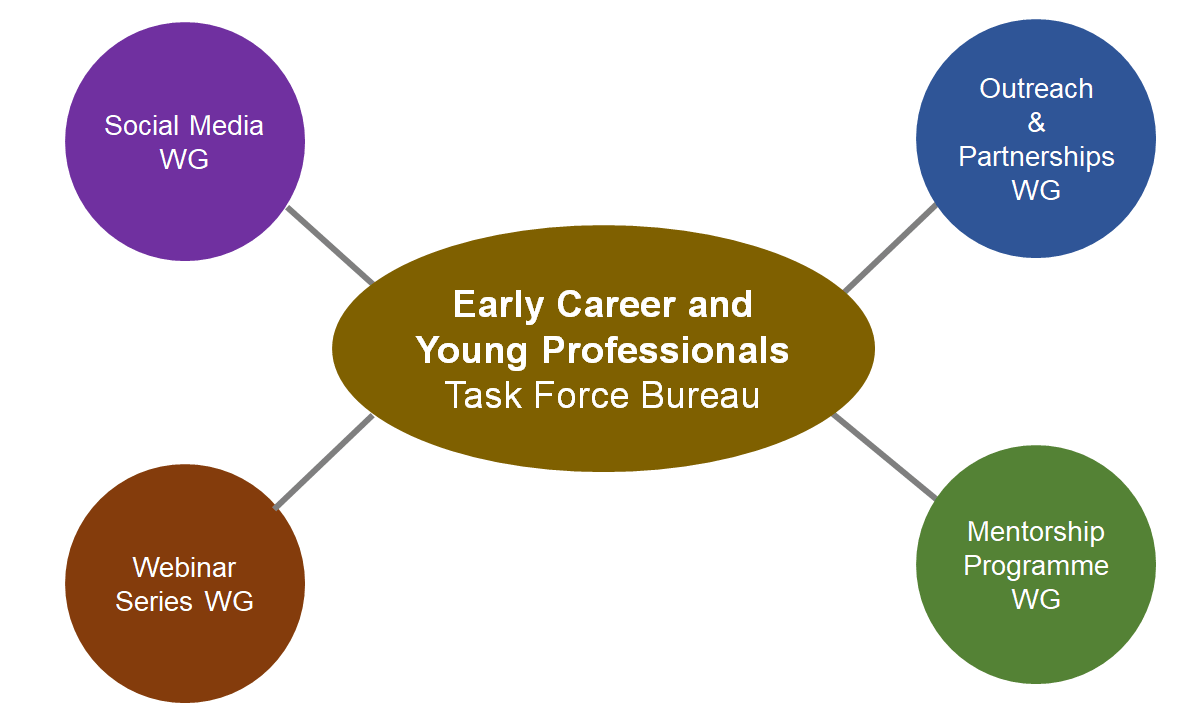 The ECYP Task Force is conformed of a Bureau and four Working Groups (WG). While the bureau focuses on the strategic vision and overall progress of the task force, each of the working groups has a list of specific objectives and anticipated outcomes within the coming 12-month period. The WG include the following:

The Social Media Working Group will focus on increasing the engagement and visibility of ECYP members within IWRA through a online initiatives, including “Why water?” and “Post COVID-Water Sector” short video series, interactive materials, etc.

The Webinar Series Working Group will provide opportunities for members to showcase their research/ work, network with others experts in their field, promote and share knowledge, etc. These working groups aim to organize and produce stimulating webinar events, which are well attended and meaningful to the entire IWRA Community.

The Outreach and Engagement Working Group will lead different engagement activities for IWRA members, including “Casual Water Coffee Breaks” and surveys to identify ways in which this task force can better serve ECYP members. It will also identify partnership opportunities with other water youth organisations.

Bassel Daher, Ph.D., a researcher at Texas A&M, is interested in bridging science and policy on topics related to water-energy-food nexus, circular economy, and sustainable development. He is dedicated to making contributions toward a future that is more sustainable, equitable, and water, energy, and food secure for all.

During her years of service with IWRA, Alice’s Project Officer position has evolved tremendously. Alice is now involved in the strategic development of several Executive Committees, including the network of members and its hosting platform, which she manages.

Alice is also in charge of coordinating some membership based task forces of experts, organizing sessions at several major international events, and acting as focal point for the thematic framework of the World Water Forums.

Last but not least, Alice is coordinating the Young Water Ambassadors Programme at the XVII World Water Congress.

Alice is based in Windhoek, Namibia, a country hit by an unprecedented drought, where the stakes around water resources are many. Alice speaks French, English and Spanish.

Alice holds a Master Degree in Risk Management in the Global South and Political Science. Her previous experiences in Project Risk Analysis and Disaster Risk Reduction make her particularly concerned by the issues of risk reduction and climate change adaptation.