Since its founding in 1971, IWRA has provided a multidisciplinary forum for the water sector through publications, events and projects. 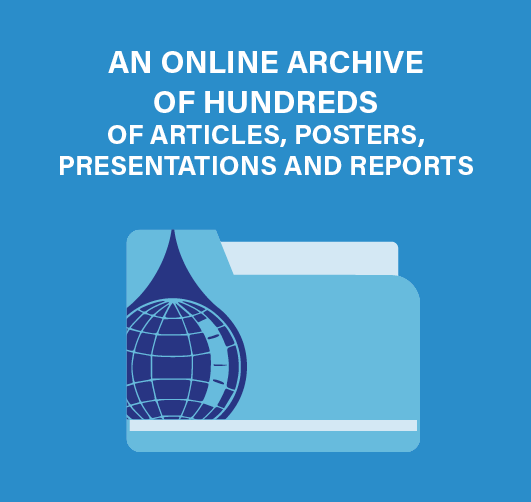 Watch the first High Level Panel on “A Conversation on Water: Assessing the State of Knowledge and Achievement” held in March 25th, 2021, and discover more about the Association's early days, its key role on global issues during the last 50 years, as well as many decades to come:

First High-Level Panel: “A Conversation on Water: Assessing the State of Knowledge and Achievement”

On March 25th, IWRA held its first 50th Anniversary High Level Panel on “A Conversation on Water: Assessing the State of Knowledge and Achievement” to celebrate this important landmark in the history of the Association.  Distinguished water panellists from various regions of the world joined this 90-minute event.  They exchanged views on water resources management during the past five decades, reflected on the current status of these resources from local to global levels, and discussed different options as to where the sector might go, and needs to go, in the next 50 years.  They also assessed the role of the Association, which was established in 1971, the progress it has made, and the opportunities that lie ahead in order to contribute to the sustainable use and management of the world’s water resources management.

From a big paradigm shift for water professionals and policy makers to important changes in legislation, the eminent panellists reminded participants that IWRA was established during a very different time period in global history.  Following more progressive and comprehensive discussions during the United Nations Conference on Water in Mar del Plata in 1977, and later in the context of water directives and agendas for sustainable development, the international water community began to focus on the critical issues that have helped shape global to local water policies in the decades that followed. Water governance, IWRM, water allocation, hydro diplomacy, water productivity, smart water management, and other topics were some of these issues.  However, the panellists also agreed that environmental and ecosystem challenges are still poorly understood as compared to a half century ago, and that more up-to-date water research and knowledge is still needed.

The panellists also emphasized that today, information and data, knowledge and research generation, and interconnectedness of water resources focusing on societal, economic and political dimensions have vastly expanded over the past five decades.  Transparency of information and government cooperation were also highlighted as contributing to the progress and change of water resources management, as was the work of IWRA and other international organisations, which have facilitated these efforts through their congresses and meetings, and by publishing journals and timely reports.  Yet, they all agreed that more attention must be put on the value of water for different needs and users, particularly for low-income, rural, and native communities, while also looking at the on-going challenges posed by groundwater pollution, depletion of aquifers and rivers, water scarcity, loss of biodiversity, and millions of people without access to water and sanitation.  A wide gap continues to exist between the theoretical and the reality of implementing laws, regulations, public participation, and other societal mechanisms, and the politicization of the water sector continues to be an area of concern.

In a forward-looking exercise, the panel also stressed the role of IWRA, and its crucial importance, to influence policy making, and to bring together multidisciplinary experts, professionals, managers, and other professionals.  Panellists discussed how the next 50 years could provide a unique opportunity to advance new paradigms, including nature-based solutions, adaptive management frameworks in response to climate change, exploration of unconventional water resources, expansion of flood storage, and other areas.  However, they noted that more political will, cooperation at all levels, in-depth considerations of equity, and raising the profile of water in international agreements would be critical to the success of these efforts.  They also suggested that open and free courses, webinars, events, publications, podcasts, and other education activities in which IWRA excels are opportunities for the Association to help share new information across communities, countries and international organisations.  In parallel, and given its extensive networks of highly knowledgeable and experienced water professionals, IWRA could contribute to global water security and sustainability by promoting public participation in the decision making processes while generating more knowledge and research on the above issues.  An international panel on water was also considered by eminent water experts as an area for the Association to explore in partnership with other UN and intergovernmental constituencies.

Moreover, access the below IWRA members’ interviews to find out more about the Association, its history, and both the key role its plays today, and to be played in the next 50 years:

In summary, Prof. Soontak Lee is presently an IWRA Fellow member; a Distinguished Professor of Hydrology and Water Resources Engineering of Yeungnam University, Korea; Hon. Governor of the World Water Council (WWC); and President of the International Hydrologic Environmental Society (IHES). Soontak has been the Chairman of the IWRA Korea Geographic Committee (1979 – to date); IWRA Board Director (1994 – 1997); Assoc. Editor of IWRA “Water International” (1992 – 1995); and, Member of the IWRA Nomination Committee (2014). He has been engaged as a Co-Chair of the International Steering Committee (ISC) of 7th World Water Forum (WWF7) in Daegu-Gyeongbuk in 2015, and also as a Chairperson and President of the UNESCO-IHP Intergovernmental Council and its Bureau from 2010 to 2012 with ex-officio & Vice Chair for Asia Pacific Region for the following two years period. He has extensive experiences in the field of hydrological sciences and water resources management and also served as Korean government representative to a number of water-related international conferences such as UN Water Conference, UNESCO, WMO, ESCAP and WWF. He obtained several Doctoral Degrees, Ph. D., D. Sc. Hon. D. Eng. Sc. & Hon. Dr. Tech. Sc from Korea University & University of New South Wales, Australia, University of Tsukuba, Japan, Altai State Technical University, Russia Federation and University of Novi Sad, Republic of Serbia, respectively. He is currently publishing the Journal of Hydrologic Environment biannually as a Chief Editor which is an official International Journal of the IHES and also published the UNESCO IHP HELP Programme Special Edition in Volume 7, Number 1, December 2011.

Professor Jean J. Fried is a Project Scientist in the Department of Urban Planning and Public Policy of the University of California, Irvine, USA.  He is currently leading a survey of California water stakeholders, both public and private, on the implementation of sustainable groundwater management legislation and preparing an international workshop on California groundwater resilience for 2021.  More information: www.researchgate.net/profile/Jean_Fried

Aaron T. Wolf is a water resources geographer at Oregon State University and a trained mediator/facilitator. He co-directs the Program in Water Conflict Management and Transformation, through which he has offered workshops, facilitations, and mediations around the world. He is the author, most recently, of The Spirit of Dialogue: Lessons from Faith Traditions in Transforming Conflict (Island Press, 2017), that he uses to bring facilitation and capacity-building to a variety of conflict settings, notably between entities who share water resources, and also in faith and interfaith communities, and within and between government agencies. He has an appointment as a Professor of Water Cooperation & Diplomacy at IHE-Delft Institute for Water Education in The Netherlands and is a partner at Four Worlds Partners. Aaron is an IWRA Fellow member and was also an IWRA Board Director (2001-2003) and Chair of the Awards Committee. More information: https://gradwater.oregonstate.edu/people/aaron-wolf

Benedykt (Ben) Dziegielewski is a Professor Emeritus at the Department of Geography and Environmental Resources in Southern Illinois University, Carbondale –SIU. He is a Doctor of Philosophy from Southern Illinois-Carbondale. Ben’s research interests are water resources management, urban water supply and conservation planning, water resources hydrology, studies of water use, water demand forecasting. He has contributed to more than 48 publications on many timely water topics.

Prof. Benedito Braga is CEO of SABESP, the water utility of the State of São Paulo, Brazil. He is a retired professor of Civil and Environmental Engineering from Escola Politecnica of University of São Paulo. He holds a Ph.D. in Water Resources Engineering from Stanford University and is an Honorary Diplomate of the American Academy of Water Resources Engineers. He is the author of more than 200 papers and 25 books and chapters of books published internationally. Braga was a member of the Board of Directors of the Brazilian National Water Agency (2000-2009), Secretary of State for Sanitation and Water Resources of the State of São Paulo (2015-2018) and President of the Intergovernmental Council of International Hydrologic Program of UNESCO (2004-2005). He chaired the International Steering Committee of the 6th, 7th, and 8th World Water Forums held in France, Korea and Brazil, respectively. He is both an Honorary and Fellow member of IWRA, as well as as Past President (1998-2000) of the Association, and President of the World Water Council (2012-2018).

IWRA Elected to the Asia Water Council’s Board of Governors!